Hayley and Alex said ‘I do’ at The Pier Geelong The delightful Hayley and Alex said ‘I do’ at The Pier Geelong on the first weekend of Spring. The day brought with it a clear skies and the beautiful blue water of the bay providing the perfect background for their ceremony in The Terrace.

After meeting in high school, the couple became engaged a few years later with Alex proposing to Hayley (on one knee of course!) after sharing dinner on the pier in Port Melbourne. When deciding on their wedding venue, the Pier Geelong seemed to be a natural choice. In Hayley’s words “We (Hayley, Alex and their beautiful little boy Harvey) go down to Geelong every chance we get – the family has a boat in the (Royal Geelong) Yacht Club and we look at the pier every time we’re down in Geelong”. 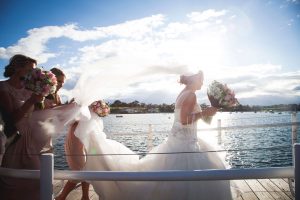 The theme for the evening was simple and elegant – “floral, but not too much – the venue speaks for itself,” tells Hayley. The couple enlisted the skills of Amanda and her team at Smellies florist in Geelong and turned on the beauty in the Lillias room and Terrace. Hayley and Alex were married in front of a hanging floral hoop hanging at the north end of Terrace, which then became the backdrop for the photo booth supplied by Shutter Hub.

The couple were lucky to have had their photographer Samantha Moody and videographer BlackIce Films recommended to them by friends who had used their services last year. From previews of the images taken so far, they’re spectacular! The couple took advantage of the weather and had photos in front of the venue, as well as underneath the pier and the results are breathtaking.

The handsome Groom and his groomsmen were dressed by Rodger David, and Hayley’s maids were clothed by ASOS.

Hayley actually discovered her divine bridal gown in an outlet – (what a find!) – and wore it along with the hoop her mother-in-law wore with her own dress on her wedding day, as a nostalgic ‘something old’. Hayley styled her own hair for the day and her classic, but stunning makeup was the work of Makeup by Tara Fairfield. 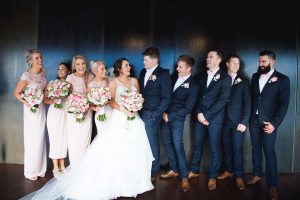 To begin the evening, a selection of gourmet canapes were served, followed by a delicious 2 course meal and the couples wedding cake – a stunning semi naked mud cake with butter cream icing made by local talent, LoveIt Cakes. A premium cheese board was served later in the evening and throughout the entire reception guests were served a range of local and Australian wines and beers. 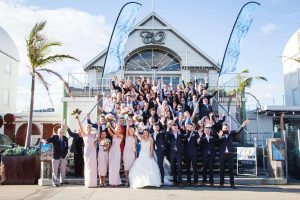 Cam Kettle Music – who Hayley says “made our night!” – entertained the guests on the dancefloor under a ceiling of white lanterns, and the groom choreographed the couple’s first dance after watching videos on YouTube – even adding in some lifts! Hayley and Alex supplied each of their guests with a CD as their bonbonniere – made with the songs of their special day, so when guests drove home they were reminded of the wedding.

Of the venue and the staff, Hayley says, “Amazing! Sarah (the function supervisor in charge on the evening) was great to us and our little boy, ensuring he had everything he needed. The guests were very happy with the service from the staff.The venue is always beautiful – even when it’s empty – so seeing it all set up was breathtaking.”

Two simple words sum up the couple’s advice for those tying the knot: “Enjoy it!”

Congratulations to Hayley & Alex from all of us here at The Pier Geelong. Thank you for allowing us to be a part of both our ceremony and reception and we send our best wishes for a future filled with happiness and love.